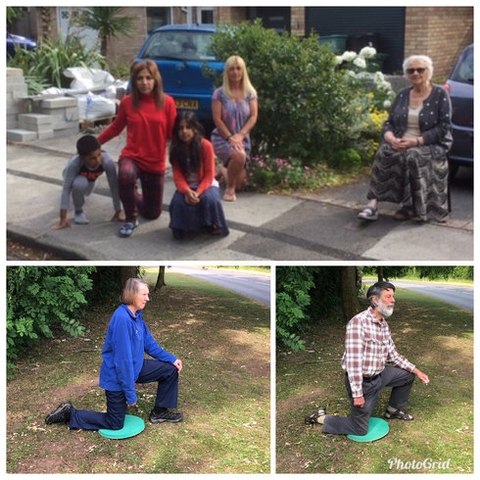 After last week’s letter, (which is still there at the bottom of this page) several members of our church marked the time of the funeral of George Floyd in Houston by taking their place outside their homes, and keeping a silent vigil for 8min46sec, the time he was knelt on by a policeman until he died. Several reported having interesting conversations with passers by, and we have been sent pictures of their ‘watch’.

Others have asked about George Floyd, and we reproduce here an article from a Christian website “Premier Christianity” which gives some details of his life and Christian witness.  You can find the original article here.

The death of George Floyd has sparked worldwide protests, and led to many vowing to change their attitudes and actions on racism. But who was George Floyd? How did he come to faith? And how should we remember him? Heather Tomlinson reports

George Floyd's death is infamous, and as a result, his history and character are being both eulogised and demonised as he becomes a target of the ugly culture war that is engulfing the West.

While much of the media reporting is now focusing on the mass protests, removing of statues and heated debates on social media, we must not overlook or forget his life. George Floyd's personal story is one of faith, of trying to escape the lifestyle of drugs and crime that surrounded him, and working to improve his community.

Floyd was closely involved in a church in Houston and friends have spoken of his deep spirituality and his concern for the people around him who were involved in violence. He warns in one video: “One day it’s going to be you and God…You going up, or you going down?" In another he urges his community: “I’ve got my shortcomings and my flaws and I ain’t better than anybody else. But these shootings going on, man, I don’t care what hood you from, man, where you at, man… put them guns down.”

He grew up in the tough 'Third Ward' neighbourhood in Houston, Texas. "People are still living in shot-gun shacks that were erected in the 1920s,” rapper Ronnie Lillard told the BBC. “The poverty is thorough...and being from that area, it's hard to escape."

Floyd has been described as a ‘gentle giant’ who played sport and had big hopes for the future.

Getting involved in the trouble that surrounded him meant he was convicted of several drugs offences before he spent five years in prison for armed robbery. But this sentence prompted a change of heart.

Following his release, he got involved with Resurrection Houston, a church in the area. Its website describes a focus on making disciples in the region, as well as a heart for social justice. “George Floyd was a person of peace sent from the Lord that helped the gospel go forward in a place that I never lived in,” said Patrick PT Ngwolo, pastor of the church, according to the US-based Christian magazine Christianity Today. And the change in lifestyle inspired others around him. “His faith was a heart for the Third Ward that was radically changed by the gospel, and his mission was empowering other believers to be able to come in and push that gospel forth,” Nijalon Dunn said.

He also acted as a gateway for the church to reach out to the community. “He said, ‘I love what you’re [the church] doing. The neighbourhood need it, the community need it, and if y’all about God’s business, then that’s my business,’” Corey Paul Davis, a Christian hip-hop artist who attended the church, told Christianity Today.

A person of peace

“When we did community outreach in the hood he was a ‘person of peace’,” Corey said. “He was one of the people we would connect with. Because he wanted to see change in the community. He wanted to see us come together as a people. He wanted to see all the things that have been stripped from us given back.”

In his own personal life, he wanted to live a better life and be there for his children. Speaking to CNN, friend and former NBA player Stephen Jackson said: "The last time I talked to him was about a year ago and every conversation we had in that year was about bettering ourselves and being better fathers. That's all he talked about."

Floyd posted videos about the young people he saw around him who were caught in violence and crime. “Our young generation is clearly lost, man… you youngsters just going around, busting guns, in crowds, killed and getting killed,” he says in one video which was posted on Twitter.

His life was precious

The state medical examiner said that he had fentanyl in his system at the time of death, and that he had used methamphetamine recently. Fentanyl is an opiod drug that can be prescribed by a doctor, but is also used recreationally and can be addictive.

However a person might choose to judge his character or his faith - his life was precious and its brutal end a tragedy.

Floyd’s death at the hands of Minneapolis policemen was caught on multiple video cameras, which showed he was not violent or out of control, or behaving in a way that warranted intensive restraint. He repeatedly told the policemen holding him down, "I can’t breathe."

His story highlights his love and concern for others, the difficulties of his community and the challenges of a person coming to faith who has a drug dependency.

Many are now hoping his death will bring about lasting change. As Clorisa Curtis said at his memorial yesterday, “I think everything that’s going on right now is powerful. I never seen us as a culture come together let alone multiple cultures coming together so I think right there shows a lot on what change is coming."

I am sure that we have all been horrified by the cruel death in Minneapolis of George Floyd, and many of us here in Balsall Common will be feeling a bit helpless and wondering what on earth we, as individuals, can do.

BUT we there is something which we can all do and that is to pray, trusting that the God we worship is an all powerful God who can and does bring about change.

As Bishop David has suggested:

“I expect that Christians, including the clergy, will want to be firmly alongside our neighbours and we may do so significantly by prayer, at home, on-line, on social media, in private outdoor spaces in our permitted groups and where it is safe to do so individually in public”

In addition to our private prayers, we would like to encourage as many of you as possible to go out to your front drive, or to the pavement outside your house,this Tuesday at 5pm,which is the time of George Floyd’s funeral in Houston Texas (11am their time.) If possible,and if you are able, please go down on one knee for 8 minutes 46 seconds, – the time that the policeman had his knee pressed on George’s neck. We have seen just how powerful the ‘Clap for Carers’ on Thursday evenings has been – let us do the same for anti-racism.

“Today, as we remember George Floyd, let us turn to a part of the Bible that has much to say about the purpose of power, the future of nations and the way that God Himself was oppressed and innocently killed by evil men:

In your relationships with one another, have the same mindset as Christ Jesus:who, being in very nature God,did not consider equality with God something to be used to his own advantage;rather, he made himself nothing by taking the very nature of a servant,being made in human likeness.

And being found in appearance as a man, he humbled himselfby becoming obedient to death – even death on a cross!Therefore God exalted him to the highest placeand gave him the name that is above every name,that at the name of Jesus every knee should bow,in heaven and on earth and under the earth,and every tongue acknowledge that Jesus Christ is Lord,

This passage promises that one day, perhaps quite soon, every tribe and tongue will finally bow the knee - not before a flag, but before the Lord Jesus Christ. On that wonderful day, every culture will bring its own unique revelation - its food, its language, its music - as equals at the coronation of an innocent Middle-Eastern man, killed without justice and exalted by God to the highest place

“As I bow the knee today before you Jesus, I ask You to search my heart. Show me where I am proud and prejudiced against those who are different to me because of their race, or their beliefs or their way of life. Change my heart. Start the revolution in me.

Jesus turns power and privilege on its head. He had everything but He made Himself nothing. He swapped supremacy for servanthood.

And so, I pray now for world leaders, asking you Lord to bring them to their knees, to prick their consciences today, that they might use their power on behalf of the powerless, to reconcile, heal and make peace.

Considering the pain and anger in my world right now I thank you, Lord, that you’ve promised, one day, there will be, ‘a great multitude that no one could count, from every nation, tribe, people and language, standing before the throne and before the Lamb.’ (Revelation 7:9)

The latest update during the current crisis more

Our Newsletter is normally uploaded here each week, in case ... more