“The Key” Our monthly Magazine - online!

A Memory of VE Day - our contribution to the May 8th Village Celebrations!

(Other contributions are still very welcome)

Here's a new one, from John Shuttleworth:

I lived in Skipton, a small market town of 13,000 population, situated at the entrance to the North Yorkshire Dales. The Cotton/Woollen industry was also very evident at that time with all the high mill chimneys in the town. Having grown up during the war years in a semi-rural environment my recollections of the war were limited to shortages of everything, rationing, gasmasks, the blackout, no holidays with friends, and neighbours disappearing into the Services, many never to be seen again, and my membership of the Army Cadet Force at school etc. There were none of the direct experiences of the ravages and destructions caused by the bombings which the larger industrial towns and cities suffered.

I remember VE–Day in May 1945 quite well because it was a national holiday and we all got a day off work and I enjoyed the day away from the smoke and grime of the local gasworks. I was 17 years old and a trainee gas engineer at the time and studying part time at the Bradford Technical College 20 miles away. Tuesday, the 8th May 1945 turned out to be a wet day in Skipton, but despite the rain I was determined to enjoy the day off and walked into the town centre, where everything went on in a small town, and joined the groups of teenagers and young people who were clearly intent on making a day of it in the rain. In one of the groups which I joined was my girlfriend Mary, who was still a school girl in the sixth form at the local Girls High School. All the schools of course had been closed for the day. I returned home later, wet through, and spent the afternoon drying out and catching up on some Technical College revision because it was examination time.

In the evening I met my girlfriend Mary again in the town centre along with the crowd of teenagers and we went to the Parish Church at 6-30 pm to what I remember was a special Thanksgiving Service. After church the rain had stopped and it turned out to be a nice evening for the town centre celebrations which presumably had been arranged at very short notice by a special Council-inspired Committee. The town's main street was packed with people in high spirits and it seemed the whole town had turned out to celebrate the victory in Europe. There was a good sprinkling of military service-men and -women in uniform on leave amongst the crowds and they attracted plenty of attention and suffered much back slapping. The Town's Brass Band was in full swing and large scale dancing in front of the Town Hall continued all evening under the lights of the street gas lamps. The young people stuck together in groups and the very old people sat in chairs in front of the Town Hall steps. The high spirits and celebrations continued until after midnight and it's one of the days I will always remember. After taking my girlfriend Mary home, I arrived at my house at 1-0 pm pretty exhausted, and ready for a good night’s sleep before work next morning. I believe Mary's mother, my future mother in law wasn’t very happy.

Incidentally, a year later I was called up for Military service with the RAF at the age of 18, and Mary went to Teacher Training College at Retford, so we didn’t see much of each other for the next two years or so. However, we did manage to get married in 1951, 6 years after VE Day, and enjoyed 70 years of married life together.

(Frank was a young soldier at the end of the war - )

This was a night I remember well, after a scary incident. At 17 years of age, I had been out enjoying the street parties and heading home after midnight, I decided to take a shortcut through the graveyard, so saving a long walk. I entered the gate intending to follow the gravel path to the exit gate, but my footsteps sounded too loud, so I stepped on to the grass verge - then realized in the dark that it was better to stick to the gravel path. It was then that I felt as if someone or thing was tugging at my long coat bottom, as if holding me back. As I walked, I could hear a scraping noise behind me, as if I was being followed. I increased my speed, but so did the scraping footstep behind me! At last I could see the exit, and the street lights beyond, and so I made it to the street outside! It was only then that I dared to look behind me - and there it lay: a fallen tree branch had snagged on to my coat, and I had dragged it all the way out!

Here’s another memory, from Claire:

I moved to Balsall Common just over 50 years ago but I was born and brought up in London. I remember very well the street parties we had for VE Day and VJ Day and the excitement they generated. I even remember the entertainment, as a radio comedian named Sandy Powell came and delighted us all with his chatter and in particular his catch phrase, ‘Can you hear me Mother?’ I have no idea why this was funny but it generally made all the audience laugh. Entertainment was simpler then. There was a Fancy Dress Competition for children and I won 1st prize dressed as Peace (see pictures below) . My Mother had managed to get hold of a piece of parachute silk to make the dress. The 2nd and 3rd were Old Mother Riley and a Nurse.

My Father had volunteered for the army just before war broke out so had been away most of the five years with only very occasional short leaves. (See Birthday Telegram, below!) I expected him to come home when the war ended but this was not to be as he was in Egypt at the time and it was seemingly a very long time until he was demobbed. He was like a stranger when he did come home.

In the same way we expected sweets and chocolate to come off ration and to miraculously appear in the shops. However it was not until 1953 that this happened, some 10 years after they were rationed.

We had very small front gardens with iron railings rather than fences or hedges. The railings were all cut down to help the war effort in the 1940s. Again we expected they would be returned but we never saw them again but were proud to have helped in a small way.

I am sure many readers will have similar memories – not to mention the nightly bombing during the blitz as well as other times. And getting undressed for bed only to put coat, hat and scarf on top of our pyjamas before going next door to the Anderson shelter.

I hope when people celebrate the 75th Anniversary this year they will remember the sacrifices that were made. Not just those of sweets and railings but the break up of families, the loss of homes and often of loved ones and the struggle of everyday life. We are fortunate to be here today and owe a lot to that generation.

Postscript. Looking back to 75 years ago, I think most people would be surprised to see the now close relationship between us and Germany. We are both members of NATO, the United Nations, the G7, the G20 and other international bodies. Both countries are actively engaged in international climate protection. Many in UK have Germany fridges, cars, etc and the trade between the two countries is strong. We take holidays in Germany and drink the wine! Difficult to imagine 75 years ago!

For me personally perhaps an even greater change. I have a much loved German son-in-law and two British/German Grandchildren as well as my German extended family. Life has definitely changed for the better. 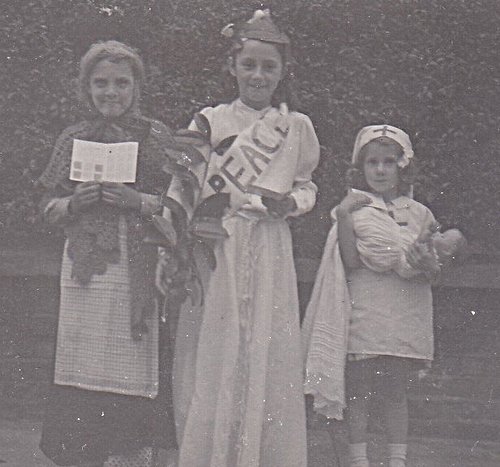 Our church magazine 'The Key' is usually available on the first Sunday of the month - sometimes a week before that.  We welcome articles from members of the congregation, and items of news to include in the monthly diary - please contact us with your contributions. If we get enough support, we might issue an online edition as a pdf e-mailed to all our mailing list - would you like that?

To reply or offer a contribution, send an e-mail to spcbalsall@gmail.com

We have made the full text  of a recent edition available here (click here) as a .pdf file online free of charge - if you do read it online, please let us know if this is helpful, and also, if you have any comments. You might like to send a donation if you like this way of reading it, instead of paying a monthly subscription! We still have to pay the printer who helps us with the layout and prints the hard copies!!!! (NB more recent issues will only be uploaded on demand!)

Our Newsletter is normally uploaded here each week, in case ... more